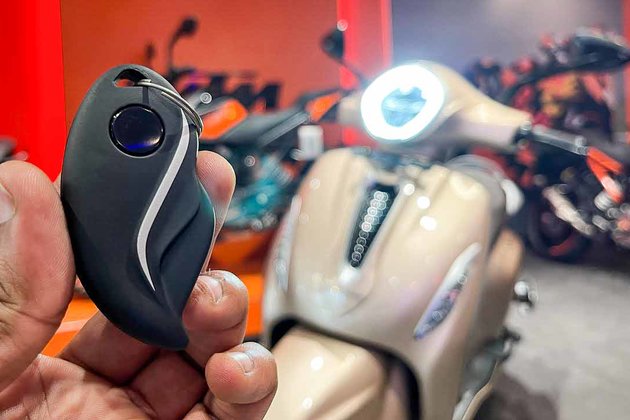 Earlier this week, KTM CEO, Stefan Pierer was in Pune, to attend the roll out of 1 millionth KTM from plant. It is here he announced that they will launch the Chetak electric scooter in Europe in first quarter of 2024. This will be part of the 50.1:49.9 joint venture that Pierer has with .

Chetak's Europe launch plan comes at the right time, as the continent is aggressively pushing the shift to electric vehicles. Europe has reached an agreement, wherein production of ICE-based vehicles will be stopped by 2035. The European continent is among the regions that have been deeply impacted by climate change. It is one of the key reasons why there's a major push for EVs in Europe.

KTM is planning to launch Chetak in Europe around March 2024, as this period marks the beginning of marketing season in Europe. In around a year's time till early 2024, KTM and will work out the finer details of Chetak's Europe entry. It is likely that Chetak will get a new name in European markets.

shouldn't have any issues with supplying Chetak for European markets, as the company has already setup a new state-of-the-art manufacturing facility in Pune, exclusively for electric two-wheelers. By 2024, the supply-chain issues and problems like shortage of semiconductor chips would have eased considerably. 's EV plant is spread over an area of more than 5 lakh sq./ft. and also includes a dedicated R&D centre. When running at full capacity, around 5 lakh EVs can be produced annually.

Chetak won't be requiring any major modifications for European markets, as the scooter already promises an exhilarating performance. Build quality is also optimal with metallic panels and high-strength chassis. In comparison, much of the current breed of electric scooters in the market have plastic body panels. Chetak has an IP67 rated water resistant battery pack, which should meet the regulatory requirements of European markets.

With a true range of 90+ km, Chetak should suffice for everyday needs. 100% charge can be achieved in around 4 hours. The scooter can be easily charged in a home environment with any 5A plug. Chetak's battery pack is designed to last 70,000 km, which usually takes around 7 years. is offering 50k km / 3 years battery warranty for Chetak.

Another useful feature available with Chetak is the dedicated Bluetooth-based connectivity platform. Users can pair their smartphones and use the My Chetak app to access a range of functions. Some examples include battery charging status, available range, navigation-based vehicle location, trip history information, owner's manual and vehicle information.