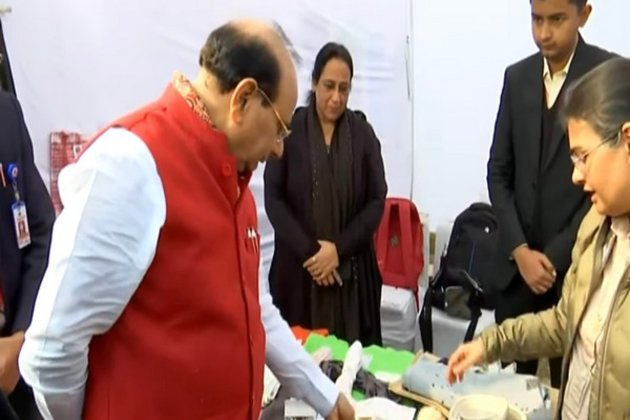 The unique campaign is initiated by the Municipal Corporation of Delhi to make the MCD area "Plastic-Free" with people's participation.

The 100 days campaign would culminate on April 22, 2023, on International Earth Day.

The LG also unveiled the mascot of the campaign-Nivaran Dadi. He also visited the exhibition of products made from plastic waste.

Addressing the event, The Lt. Governor said, "I have a vision that Delhi should become a clean and beautiful city and all efforts are being made to attain this objective. MCD and PWD roads are being cleaned, though a lot of work is still to be done."Giving an idea to combat plastic pollution, he said, "If we stop taking plastic bags from vegetable vendors, shopkeepers and others, then this problem will start ending automatically."LG further said, "Now there is no need to discuss the ill effects of plastic. It is well known. No initiative is successful without public participation and I am happy to note that RWAs and Market Traders Associations have taken the initiative to make Delhi a plastic-free city. We will definitely be successful in this endeavour. Delhi faces the problem of water-logging every year for which plastic is also largely responsible."He also said, "Delhi is moving towards the goal of a zero waste city. We have so far declared 120 RWAs/GHSs as zero waste colonies. The height of landfill sites is also decreasing. We all need to work unitedly to make Delhi a better city."On the occasion, the MCD Commissioner Gyanesh Bharati said, "Delhi generates 11,000 tonnes of waste daily, out of which about 10 per cent is plastic waste. The corporation has done a lot of work since single-use plastic was banned. However, due to the lack of alternatives to plastic, there is a problem in implementing this ban completely."During the programme, a detailed presentation on the action plan of the '100 Days to Beat Plastic' campaign was given.

Under this initiative, MCD has planned various activities including the intense inspections of all shops and markets to seize the banned single-use plastic, plogging drives with the Brand Ambassador of campaign-Plogman of India, distribution of cloth bags, the opening of more Vikalp stores, wall art and Installations related to Plastic, awareness and outreach events to combat single-use plastic.

It is hoped that when the 100 days campaign ends, Delhi will be ready for use of alternatives to plastic. During the campaign, MCD will focus on making markets, parks, and hotel/banquets plastic free in a strategic manner.

Under the campaign, MCD will promote segregation at source, and doorstep pickup of plastic and Dhalaos will be used for Reuse, ReduceRecycle (RRR) facility in each ward.

MCD will conduct an inspection of every shop, factory, and commercial enterprise and stickers of declaration of SUP Free Area will be put in these areas.

Plogging drives will be held in identified locations and Reverse Plastic Vending Machines will be installed at high-footfall locations.

MCD plans to open at least one Vikalp store in each market to discourage the use of Plastic bags.

To implement the ban on single-use plastic and discourage the use of plastic cutlery in hotels and banquets, MCD will encourage the introduction of alternatives to plastic.

Monthly inspection will be done by MCD and SUP-free certification will be made as a mandatory compliance. Through this campaign, MCD has set the target to make all the parks SUP Free.

MCD has decided that name boards made of shredded plastic will be used in all MCD Parks and an appropriate number of dustbins will be installed in each park.

The Public Health Department of MCD will modify the license terms to include - no usage of single-use plastic, especially plastic cutlery in hotels, eateries and restaurants.

Extensive mapping will be done of all malls in Delhi to ban the SUP and declare them SUP Free. Mall Authority will be asked to issue an instruction for prohibiting the use of SUPs on entire premises.

MCD will target to make schools and universities SUP-free premises.

Every day "No use of banned SUPs" pledge will be practised in all schools. (ANI)