Covid-19 is the salt in South Africa's wounds 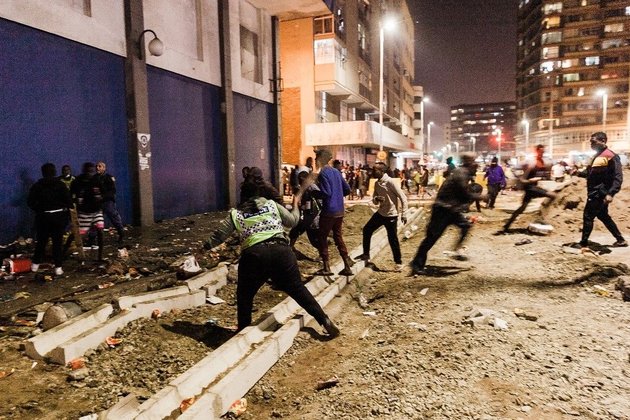 Pandemics don't cause riots. They do, though, create the perfect conditions for turmoil in fragile societies that are already powder kegs of inequality and sky-high unemployment, and where coronavirus has inevitably hit the poor hardest.

South Africa's days of unrest this month, the worst violence since apartheid, were triggered by the jailing of former president Jacob Zuma on contempt-of-court charges. The financial pain caused by Covid-19 was dry kindling and fuel.

After mayhem that left more than 200 people dead, shattered storefronts are now at last being swept up. But the social and economic damage caused by the pandemic is not over, and the unseen damage behind the anger of recent days, from malnutrition to surging school dropout rates, will hamper the cash-strapped country's longer-term convalescence. It's a crisis that can also compel the government, business leaders and civil society to fill some of the gaps Covid-19 has widened.

On a continent that initially appeared to escape the worst of the pandemic, South Africa too started off well enough. It had time to prepare, the government quickly imposed restrictions when the first cases did turn up and the healthcare system withstood the pressure. Subsequent waves, though, have been deadlier. The country last week was grappling with both rioting protesters and a third wave of infections, fed by public exhaustion and more infectious strains.

The human toll has been high. South Africa's confirmed Covid-19 cases now stand at 2.3 million, the continent's highest number by far, in part because of a larger number of diagnoses. Official figures put deaths at more than 67,000, though excess mortality data - seen as a more accurate measure of the real impact - suggest a figure that could be nearly three times that. Part of the problem is that South Africa's vaccination campaign has been bumpy. Supply issues have now eased and the government is urgently trying to hit a rate of 300,000 a day, but it has still fully vaccinated only 3% of a 60 million-strong population - nowhere near enough to blunt this latest surge's impact.

The economic cost is no less troubling for a country that was faltering even before the pandemic. Its GDP grew a paltry 0.2% in 2019, public finances were threadbare, while unemployment ended that year at just over 29% - it has now climbed to 32.6% in the first quarter of 2021. Poverty levels that had improved since 1994 were already creeping higher.

Some analysts have described the impact of this month's disquieting unrest as transitory. That may be, even if many smaller store holders do not rebuild; infrastructure, ultimately, can be fixed. The same is harder to do with at least some of the deep inequalities that contributed to the rage.

Certainly, we know from past epidemics like SARS, Ebola and Zika that such outbreaks make existing inequality worse, as disasters are wont to do across the developing world. But South Africa was already among the most unequal - if not the most unequal - country on earth by most measures, with the richest 10% holding more than 85% of household wealth. The bottom half of the population owe more than they own.

The pandemic then strained mental health, made informal jobs more insecure, education intermittent for any but the 9% of South African households connected to the internet. Food - and worse, nourishment - became scarcer, worrying in a country where in 2016 more than a quarter of children under five years of age were found to be stunted, a marker of under-nutrition that tends to correlate with weaker cognitive development and earning potential.

A lot of things went right in South Africa during the pandemic. The current government, unlike leaders of the past, has followed the science and has ample evidence to draw from - including comprehensive data on social impact like that of the National Income Dynamics Study - Coronavirus Rapid Mobile Survey, known as NIDS-CRAM. Civil society works. The judiciary compelled the government to feed school children during lockdown - "hunger is not an issue of charity, but one of justice," the judgment read - and is holding a former president to account.

But the problems run deep. Consider education, where after almost three decades of democracy, chasms remain. Evidence from NIDS-CRAM suggests that the number of children between 7 and 17 dropping out of school tripled from pre-pandemic levels to more than 750,000 in May 2021. Among primary-age children, researchers calculated that between March 2020 and June this year, most lost between 70% and a full year of learning. The brain is at its most plastic in the early years, so that damage lingers. Learning loss is often cumulative, and children who drop out of school tend not to return.

Dealing with these silent costs alongside the health emergency requires the acknowledgement that there was a price to pay for lockdowns, however life-saving, and that economic growth will not fix the problem anytime soon.

That means the urgent need to redirect limited funds toward a basic income grant, as President Cyril Ramaphosa has hinted, or backing initiatives like the education assistants plan that placed hundreds of thousands of young people in classrooms - a politically palatable direct intervention that helps youth unemployment and stands a chance of improving dire literacy and numeracy levels, too.