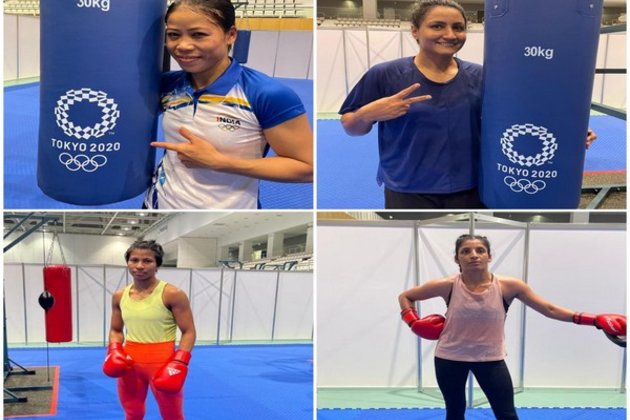 Tokyo [Japan], July 20 (ANI): Mary Kom and Pooja Rani along with the entire boxing contingent began their training in Tokyo ahead of the upcoming Olympics.

Official Twitter handle of Boxing Federation of India (BFI) shared photos of the pugilists beginning their training and it captioned the post as: "Training in Tokyo. Here are some glimpses as our Baazigars sweat it out at Olympic village ahead of the @Tokyo2020."Equestrian Fouaad Mirza has also started his training ahead of the Games, beginning July 23 in Tokyo.

Earlier, shuttlers PV Sindhu and Sai Praneeth hit the court running on Monday and they trained alongside coach Park Tae Sang. Paddlers Sharath Kamal and Sathiyan Gnanasekaran also started their training and they were seen battling it out on the table tennis court.

Indian archers Atanu Das, Tarundeep Rai, Praveen Jadhav, and Deepika Kumari also kickstarted their training on Monday. The Indian contingent that departed for Tokyo from New Delhi on July 17, after an official send-off at the Indira Gandhi International Airport, safely reached Japan and checked into the Olympics Games Village.

All 88 athletes underwent Covid-19 testing at the airport and were found to be negative. Their PVC cards were also validated at the airport.

A total of 127 athletes across 18 sports disciplines from India will be heading to Tokyo. This is the biggest-ever contingent India is sending to any Olympics. The 69 cumulative events across the 18 sport disciplines that India will participate in are also the highest ever for the country.

Tokyo Olympics will run from July 23-August 8. The mega event was slated to be held last year, but it had to be postponed due to the Covid-19 pandemic. (ANI)